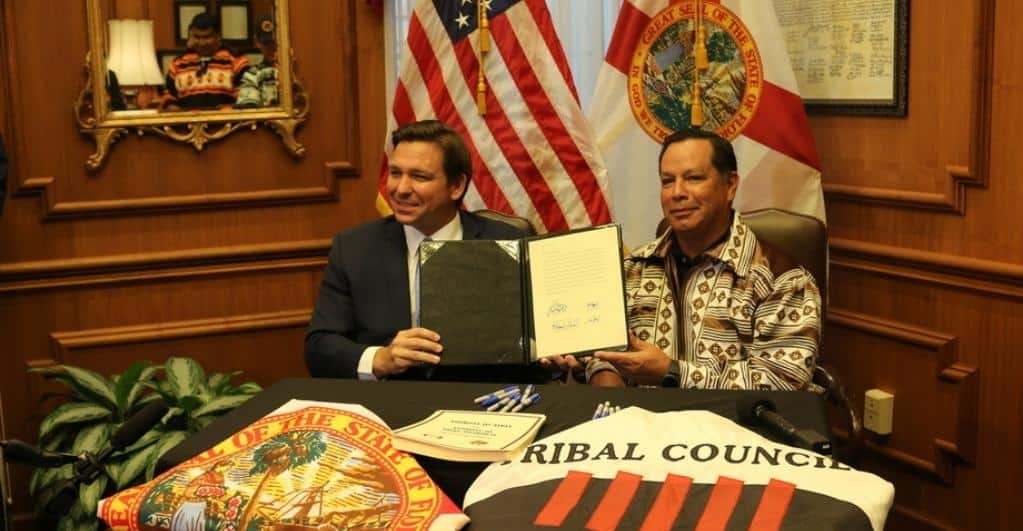 The recently established deal between Florida and the Seminole tribe is now facing legal complications. Recently, two pari-mutuel operators filed a federal lawsuit against the agreement. In addition, Bonita Springs Poker and Magic City Casino owners are resisting the sports betting plan passed by lawmakers in May.

As per the operators, the plan established between tribal leaders and Governor Ron DeSantis goes against federal laws. In addition, the deal stated that the Seminole tribe would become the sports betting hub in Florida. Authorities previously banned the activity in the state, but the deal allows bettors to place online bets via servers based on tribal property.

However, the recently filed 67-page lengthy lawsuit states that the federal “Indian Gaming Regulatory Act” doesn’t allow anyone to place bets from the off-tribal property. Plus, the lawsuit challenges the deal’s structure, stating it is merely a get-around of the state constitutional amendment 2018.

The casino owners added that the state constitution 2021 specifies that a bettor placing a sports bet from his home’s couch or poolside chair is not placing a bet, which can be illegal otherwise. The new law unlawfully sees the bets placed via the servers placed on the tribe’s properties. The entire process is a mere legal fiction based on the lie that bettors place bets outside the tribe’s properties within a state that has imposed a ban on sports betting.

The US Department of the Interior still needs to decide the deal with the Seminole tribe. Supporters speculated the deal to face challenges from the get-go, as Chris Sprowls (House Speaker) stated in May.

Jim Allen (Seminole Gaming’s CEO) also said in an interview that legal complications are expected. However, he added several benefits the deal would bring to the state. He pointed out how illegal sports betting institutions are earning billions of dollars every year. Regulating the process will protect the citizens and help the state get more tax revenue. Moreover, it will forfeit any illegal activity like money laundering.

The opposing casinos and attorneys present an argument that the deal will remove pari-mutuels from the market. If the deal is executed, pari-mutuels unable to deal with the tribe will lose all control of the market. In addition, it will affect the gambling settings of the state, shutting down slot machines, pari-mutuel wagering, and card rooms. Ultimately, this will cost the state to lose more tax revenue. Additionally, it completely denies the casinos the opportunity to join the competition.

The recently established sports betting deal with the Seminole tribe is facing legal challenges. Two pari-mutuel operators are opposing the deal, offering valid arguments against it. The deal is yet to be approved by the US Department of the Interior. Despite the lawsuit, only the court will declare the final decision about its implementation.